First on this tape, Moonlighting and the episode And the Flesh was Made Word. After a moody opening with a writer giving good voiceover, we cut to Maddy getting her marriage to Dennis Dugan annulled. And Brooke Shields has had her baby, but she and David aren’t an item, so Maddy gets cross that David isn’t suddenly all over her.

The show ends short, and because there’s a writer’s strike, they don’t have anything to fill with, so they persuade Burt Viola to lipsync to Wooly Bully. 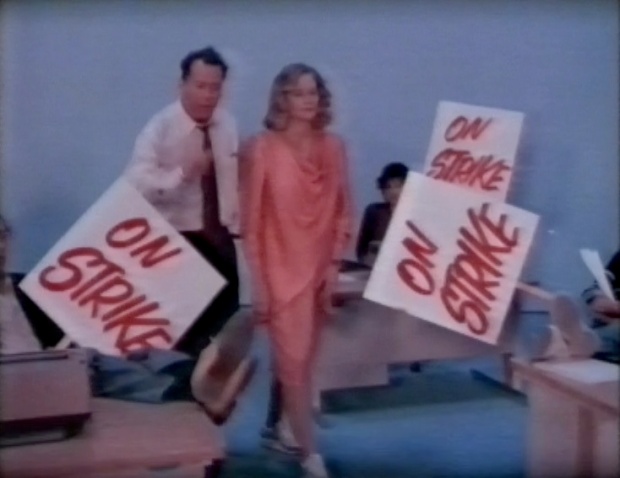 The next episode is Here’s Living With You Kid. Burt isn’t seeing much of Agnes, as he’s staked out watching a grapefruit tree.

There’s a Rudolph Valentino pastiche in there somewhere. 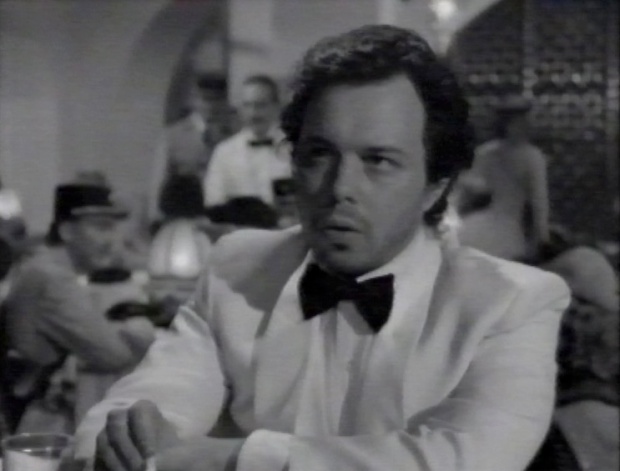 Before the next episode, the end of Food and Drink, with a health scare about aluminium pans.

There’s a trailer for The Late Show.

Then, more Moonlighting, with A Womb with a View. Coming after the last season, hit by the writers’ strike, there’s plenty of breakage of the fourth wall in the opening, along with a song and dance number. 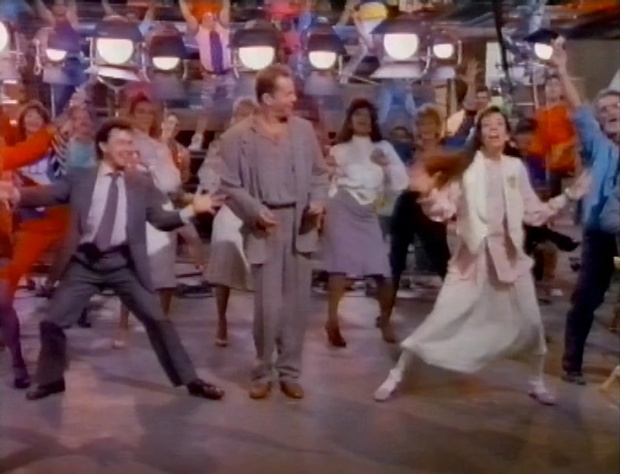 The main episode features Willis as Maddie’s unborn baby. In a nappy.

He’s visited by ‘an emissary from the creator’ to prepare him for living in the world. He gives him a briefing about the world, and his parents, David and Maddie.

But after all the touchy feely getting to know you, the plan changes. “You are no longer destined to be David and Maddie’s child” he’s told. Instead he’s promised that he has two other prospective families. I presume, at the time, these would have seemed like perfect alternatives, but “Kirk Cameron’s little brother or Bill Cosby’s grandson” seems like a pretty poor exchange these days. (If you don’t know who Kirk Cameron is, he’s a former child star who’s now a rather ridiculous evangelical christian personality. Here he is demonstrating how the banana is the atheist’s worst nightmare.

It’s quite a bold step for the series to take, I think, and the next episode (which I looked at recently) deals with their trying to come to terms with it. David’s stoicism in particular was nicely handled. It’s a hard subject for such a frothy show, and I don’t think they did too badly. Introducing the child as a character before taking him away has the effect of amplifying a sense of loss for the audience. Miscarriage, if you’ve never experienced it, can often seem like a small thing, but for the people involved it’s often devastating, and if this episode gives even an inkling of the emotional hurt you can feel then it was successful.

Afterwards, there’s a trailer for an interview with Sirhan Sirhan, the man who shot Bobby Kennedy.

Then, there’s the start of Moving Stories, a precursor to the hundreds of daytime programmes about house buying.

The tape stops during this programme.