Before the main feature, Keith Harrison reads the LWT news headlines. Bit of a cheap in-vision presenter, here, not up to ITV’s usual standard.

Then, an ITV Movie Premiere, with Stephen King’s Children of the Corn. This is a movie which nobody really expected much from – a low budget horror based on one of King’s short stories, it could have been another Cat’s Eyes, but this movie has, rather amazingly, spawned eight further movies, although having seen none of them, I can’t comment on their quality.

This one, though, is an effective horror movie, which I’ve always thought benefits from being based on a short story. Novels are often much too long and complex for a single movie, but a good short story can provide just enough material for a very effective movie, and at 90 minutes, this is about the right length for a horror movie.

I don’t think I’ve watched this since the 80s, so I wonder if it holds up at all. The opening is quite shocking, as the children in the town of Gatlin all suddenly turn on the adults and kill them all, led by the enigmatic young preacher, Isaac. What makes the opening work is that the film starts with a really bubbly voiceover from one of the children, the only one who did not take part in the massacre, so when the kids suddenly start poisoning, stabbing, slashing and cleaving the adults, it’s an abrupt tonal shift that really works. 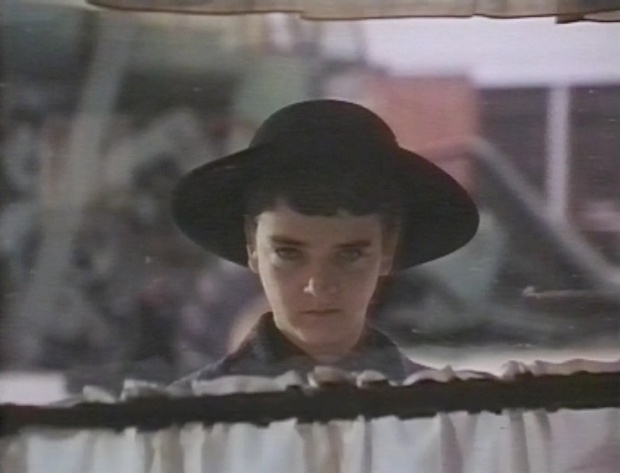 Cut to three years later, and Linda Hamilton (Sarah Connor herself) and Peter Horton (off of thirtysomething) are celebrating his birthday in a motel. They’re driving to his new job, which takes them close to Gatlin. At the same time, one of the children, who isn’t under Isaac’s spell, tries to leave the town, but Isaac’s henchman Malachai, played by the unmistakable Courtney Gains in his first film role, kills the boy, then leaves his body propped up in the middle of the road, so that Horton and Hamilton, distracted momentarily in that way people often are in films, hit him.

This is such a common scene in films, and so often makes little sense. They’ve been driving down these straight, flat roads, and yet a tiny distraction means they hit an obstruction. They’d see it on the road a mile away.

Anyway, despite being warned away from Gatlin by the only grown-up in the area, the obligatory old man who gives portents of doom, their car seems drawn to the place. Isaac tells the children that it’s all part of a prophecy from He Who Walks Behind the Rows, the strange pagan god they worship.

This middle section is less successful, as the tension from the start dissipates, and they spend a lot of time wandering around the deserted town. My recording is not helped by the temporary loss of sound during this section. ITV can’t even get the apology for loos of sound right, either, as two different voices pipe up to apologise.

Eventually, Malachi decides that Isaac isn’t doing a crazy enough job as their leader, so he tries to sacrifice him, but this backfires when Isaac comes back from the dead. Then the evil spirit that lives in the cornfield starts manifesting as some dodgy looking electronic effects, and Peter Horton has to work with the cute kid from the opening to burn down the cornfield and destroy it.

Ultimately, I think this film is a little too stretched – I still think short stories can be good film sources, but they needed a little less padding in this one. But John Franklin as Isaac was excellent – and iMDb says that he went on to appear in Beauty and the Beast as ‘Young Vincent’ – another Linda Hamilton connection.

There’s another tape glitch during the credits, but it’s hard to tell if that’s on broadcast or just on my recording.

After the film, recording switches, catching a bit of the end of an episode of The Media Show talking about price fixing and cartels in the TV industry

Then, it’s Episode 3 of Brond, which I have recorded elsewhere. I’m not sure why I have two copies of this, but there we are.

After this, there’s a short programme in the series Election Briefs.

After this, the start of Voices introduced with “And now on 4 the question is, what do women want? A possible answer through psychoanalysis in Voices.”

Luckily, we have Michael Ignatieff to help us pick through the tricky issue of what makes a woman. At least the rest of his panel is made up of women psychoanalysts, and he’s merely the moderator.

The tape ends after a few minutes of this programme.